Venus transited across the face of the sun as seen from the United States on 5 June 2012. The transit is a very rare astronomical event which was first observed in 1639. Observing the transit of 1769 was a main purpose of Captain Cook's first voyage to the South Pacific. For the 2012 transit, I traveled to Eastern Utah to photograph it. The first two photos were made from 109° 50.578' W and 38° 38.345' N, alongside Spring Canyon Road which is about 15 miles north of the Island in the Sky in Canyonlands National Park. The third photo was made several miles further east and north alongside US 191. The sky was perfectly clear, although it was quite windy, and there was a considerable amount of dust in the air, but not enough to prevent making the photographs.

The photographic equipment I used included a Nikon D200 (10Mpix) camera body, a Nikon 300mm f/4 lens and a Nikon TC301 teleconverter (2x), all mounted on a tripod. This system yields a 35mm-equivalent focal length of 900mm. I also used the coated-glass solar filter which fits my Celestron C8 telescope. The exposures were all at ISO800, 1/800 second, while the aperture was f/4 x 2 = f/8 to keep the shutter speed as short as possible in the wind. The exposure times listed are from the camera clock.

Several groups of sunspots are visible on the face of the sun. The rotational period of the sun is 25.05 days, so the sunspots do not move appreciably during the 2 hours which passed between the first and last photos. 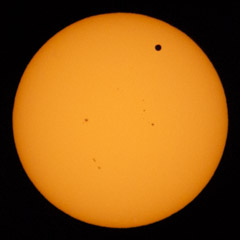 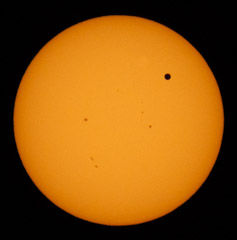 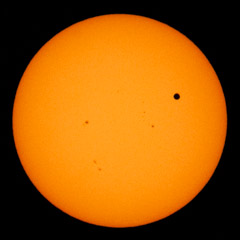