Sun Tunnels is a work of land art which was constructed 1973-1976 by US artist Nancy Holt (b1938-d2014). The tunnels are arrayed on the desert floor near the ghost town of Lucin which is northwest of the Great Salt Lake in the Great Basin desert of Utah, USA. Sun Tunnels consists of four large concrete tubes or tunnels. Each tunnel is aligned to one of the four local azimuths of the rising and setting sun at the summer solstice in June and at the winter solstice in December of each year. The tunnels have a diameter of nine feet or about three meters, and they are twice as long. At every summer solstice, the sun shines exactly down the axis of the northeastern tunnel at sunrise and it shines exactly down the axis of the northwestern tunnel at sunset.

At every winter solstice the rising and setting sun shines through the southeastern and southwestern tunnels, respectively. If the Sun Tunnels were at Earth's equator, then the northeast and southwest tunnels would be coaxial, as would the southeast and northwest tunnels. At their actual location, near 41°16' north latitude, they are not coaxial but their axes differ by about 3°. Holt drilled the upper portion of each tunnel with several small holes which are in the pattern of one of four constellations: Draco, Perseus, Columba and Capricorn. The mid-day sun shines through these holes to form a constellation pattern as bright spots on the inner surfaces the tunnels. The diameter of the hole for each star in a pattern is proportional to the star's brightness in the sky. 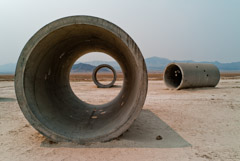 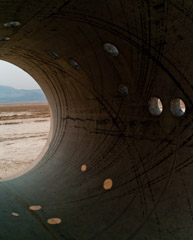 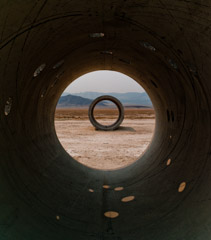