Regina and I have now made two day-trips to the Snowy Range which is west of Laramie, Wyoming. We went there to find the ancient stromatolite fossils that exist there. The Snowy Range is the northern portion of the Medicine Bow Mountains that span the border separating north central Colorado and south eastern Wyoming. The range's peaks above the treeline consist of white quartzite that makes them look snow-covered all year.

Our first day trip was in October of 2017, and Mike searched for an hour or so for the stromatolites, while Regina worked on her words at our vehicle. He was only partly successful in finding the fossils, so we returned in late August 2018, when we both hiked through the islands of Subalpine Fir flag trees just below treeline, searching in a more organized and more successful expedition.

Stromatolite fossils occur pretty much world-wide, and represent some of the oldest life that has existed on Earth. A few of stromatolite descendents survive today, most notably along a shore in Western Australia. Stromatolites form in shallow water and consist of alternating layers of mat-forming organic cyanobacteria which wave action covers with sediment after which the bacteria survive to grow another layer above. These alternating layers build up over time, and they can survive the process of fossilization.

A few, very oldest, stromatolites date back to some 3.5 Gy (billion years ago), not long after Earth had cooled enough to support life, and sunlight-harvesting cyanobacteria were nearly the only form of life until about 550 My (million years ago) by which time they had produced sufficient atmospheric oxygen to facilitate the explosion of other life forms that began about that time. The stromatolites on the Snowy Range are probably the best examples for their age. which is 1.7-1.8 Gy. They formed along the what is now the southern margin of the Wyoming craton which, at that time, was a main piece of land above sea level that survived subsequent tectonic processes to become part of North America. The craton existed during the fourth-to-last supercontinent, called Columbia or Nuna, which collected Earth's land masses together from 2.0-1.8 Gy. The Wyoming craton was also part of the subsequent supercontinents of Rodinia, Pannotia and Pangaea.

Toward the end of the time that the Snowy Range stromatolites lived, the Colorado orogen added much land to the Wyoming craton, possibly via a sequence of island arcs that collided and merged with the Wyoming. In doing so, those collisions buried the land and sea-bottom near the shore and with it the stromatolites. The sediments, along with the stromatolites, lay deep underground for some 1.7 Gy, and all were heated and compressed by the great subterranean conditions to become the metamorphic rock named quartzite and the sedimentary rock called dolomite that predominate in the area today. The stromatolites were also transformed as silicification turned them into the fossils we find there today. At the end of the long period of transformation underground, these rocks were raised toward the surface via the Laramide Orogeny, the name given to the process that formed today's Rocky Mountains. That process began some 60 My ago and lasted for millions of years. As the mountains were raised, erosion and then glaciation removed the many layers of other rock above the rocks and fossils that we find there today.

Some of the many of the stromatolites in the area are described and useful directions for finding some exceptional ones of them are given in a publication of the Wyoming State Geological Survey: "Self-guided Walking Tour of Paleoproterozoic Stromatolites in the Medicine Bow Mountains, Wyoming", 2014, by D. W. Boyd and D. R. Lageson. 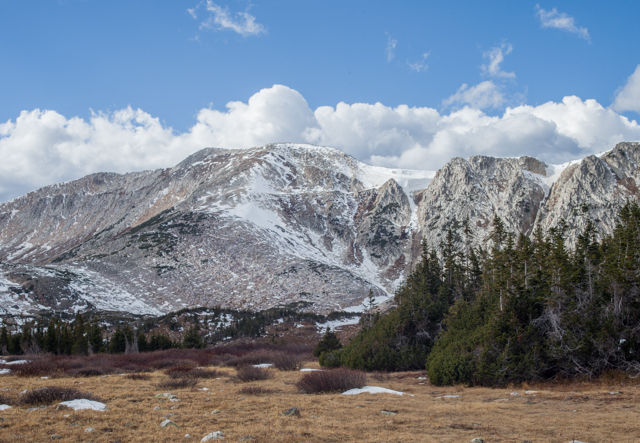 The highest peaks of the Snowy Range are composed of white quarzite which, from a distance,
makes them appear to be covered by snow all year. (Oct. 2017) 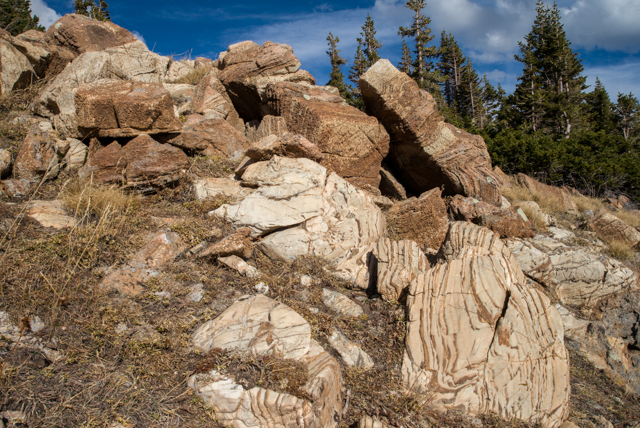 The tan, laminated rocks in the foreground are layered dolomite. The darker layered rocks behind them
are stromatolites. (Oct 2017) 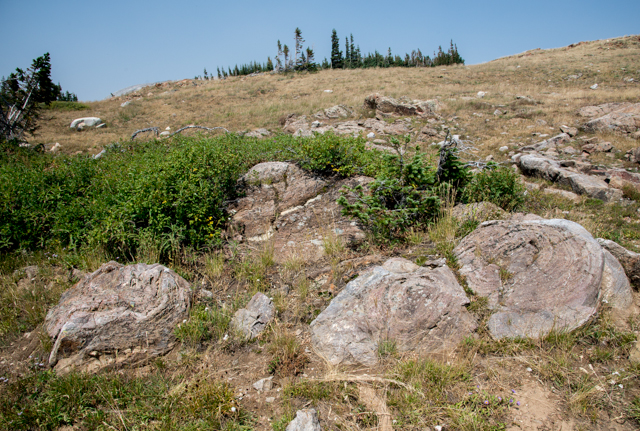 The bulls-eye pair of stromatolites at right are cross-sections of stomatolite domes which show
circular layers of organic matter separated by sediment. 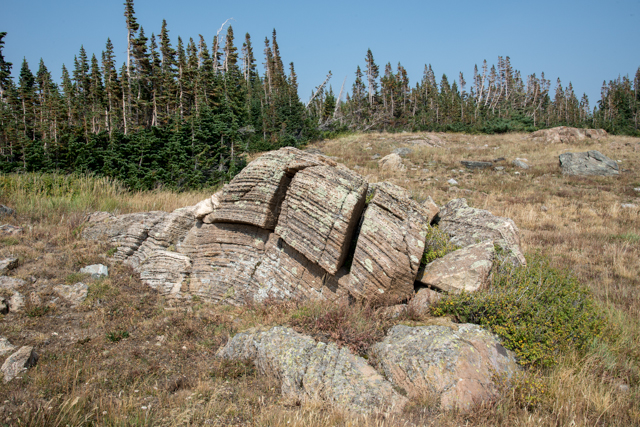 This stromatolite is a large one that has been fractured by the geological process that brought
it to the surface. 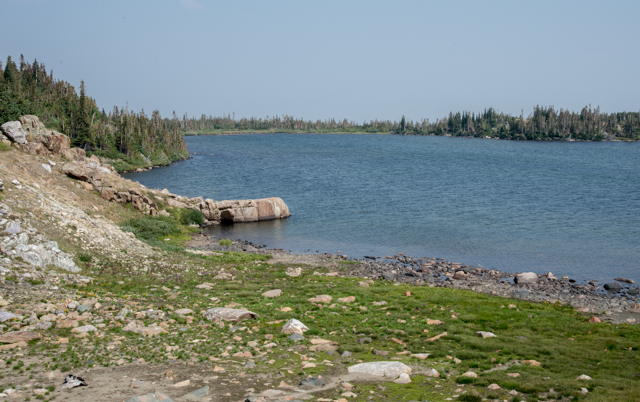 The large, tan rock that projects into Prospect Lake is a very large stromatolite.

The small backpack sitting on the stromatolite shows its very large size. 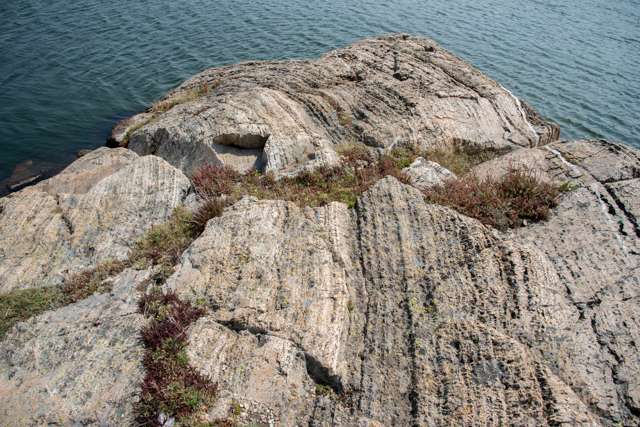 This closer photo of the outer portion of the very large stromatolite clearly shows its layered structure. 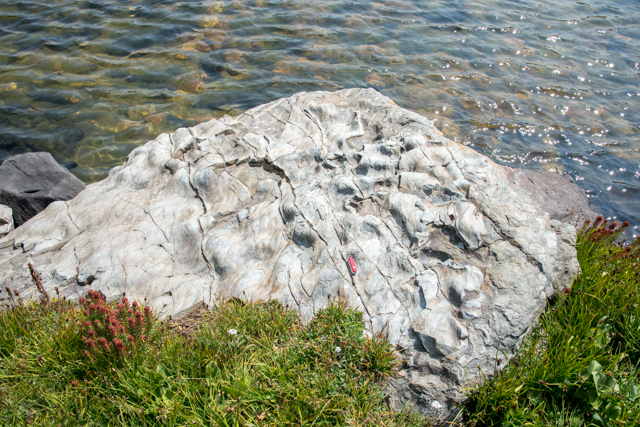 The undulating surface of this rock, also at Prospect Lake, has rounded bodies that may be small
stromatolites as has been identified by others in similar-looking rocks found elsewhere.