Making good on a long delayed intention, we decided to go and visit Georgia. Lufthansa is our favorite way to travel to or through Europe, because there are daily flights from Denver to either Frankfurt or Munich. However, the Lufthansa service to Georgia's capitol Tbilisi has an arrival time of 04:25 ... that's AM! We didn't think that was a very good way to start a trip. So instead, we opted to fly Lufthansa through Frankfurt to Istanbul, spend a couple of days there and then fly on Turkish Airline to Tbilisi. That flight lands at Tbilisi in the afternoon. Istanbul has become one of our favorite cities, and this plan would enable us to see some of the city that we've not before visited.

We departed Denver on Lufthansa on Wednesday, September 26. We got very little sleep during our plane ride from Denver to Frankfurt, mostly because of severe turbulence from Labrador out over the North Atlantic.

Frankfurt is a weird airport with a route for us between planes that seemed a marathon of long walks, many stairs, a train and a second security line manned by non-German speakers who were in no hurry to process the hoardes of us waiting in the long lines. We eventually got to the correct concourse in plenty of time, so we ate a (very expensive!) snack after we got hungry waiting a while near the gate. The flight left on schedule, and we landed in Istanbul in late afternoon. 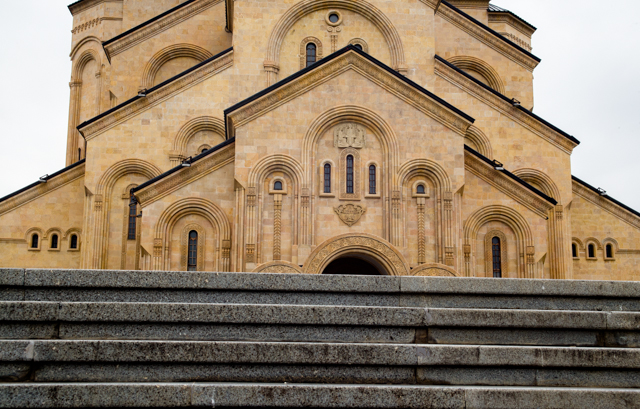 A Long Ride
A Most Ancient Church
The Crooked Clock Tower