Spiral Jetty is a work of land art which was constructed in 1970 by US artist Robert Smithson (b1938-d1973). The installation is located on the northeast shore of the Great Salt Lake of Utah, USA. Spiral Jetty is built of black basalt rocks from the land surrounding the Great Salt Lake. The rocks are arranged in a counter-clockwise Archimedes spiral which juts out from the highest shore of the lake near Rozel Point. The jetty is about 15 feet or 5 meters wide and runs for nearly 1500 feet or 460 meters including the "stalk" which connects it to the shore.

In 2010, when these photos were made, a drought had caused the lake to receed from the shore leaving a wide band of salt between the shore and the water. The jetty can be negotiated on foot except when the water level is high and the jetty is submerged. The black basalt rocks were bare when moved from the surrounding area to build the jetty, but now some still retain a coating of salt from previous high water levels. Barring an unlikely flood that raises the lake level and buries it, the jetty will perhaps survive for millennia in the dry desert climate. 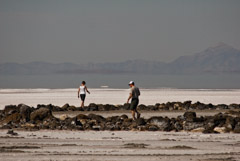 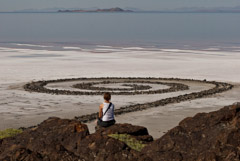 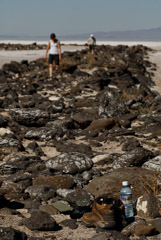 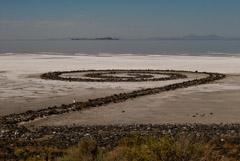 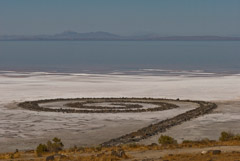